Dharwad district in Karnataka is famous for its architectural heritage and temples of gods and goddesses spread across the town and its neighbouring areas. Built and established over centuries under different rulers who reigned over Dharwad, these temples are marvelous examples of exquisite architectural importance. Banashankari Temple at Amargol town of Dharwad district situated in the state of North Karnataka is an edifice which is unique and divine at the same time.

A popular tourist spot and thronged by visitors and devotees throughout the year and on festive occasions, Banashankari temple is dedicated to female goddess Parvati. Situated in between Unkal Lake and Chandramouleshwara temple at a distance of 8 kilometers from Hubli district in Dharwad, Banashankari temple is an artwork which figures on a tourist’s must visit list. This ancient temple established around 13th century is a witness to northern architectural influence in Karnataka monuments and heritage sites with Nagara form of art on which the temple is modeled 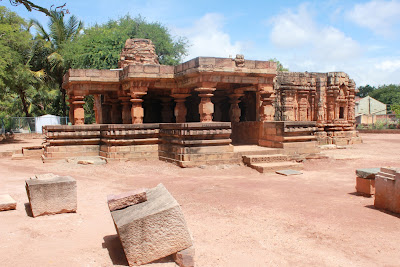 Banashankari temple has been created in a shape of two stories or Vimana or a Dwivukta style. With one storey built like a diamond shaped Nagara style steps form and the other storey built on Dravida architecture with two relics or shrines atop Vimanas. Among the two relics, one is dedicated to Lord Shiva and the idol is placed there and in the other, Goddess Parvati is seated as Banashankari. The main attraction is the courtyard or Navaranga Manadapa created with figurines of Vishnu, Shiva, Parvati, Ganesha, Brahma, Narasimha and other incarnations of gods and goddesses in Banashankari temple.

The name Banashankari is derived from the acronym Vana Shankari roughly translating as the goddess of the forest who descended from heaven on earth at the request of the gods to destroy Durgamasura, a demon who was wreaking havoc. Banashankari is considered an incarnation of goddess Parvati to whom the gods prayed in order to relieve them from Durgamasura’s torment. Banashankari temple is currently revamped by Archaeological Survey of India and protected by ASI under Ancient Monuments and Archaeological Sites and Remains Act. Devotees gather in this temple on the auspicious occasion of Shivratri in the months of February and March.