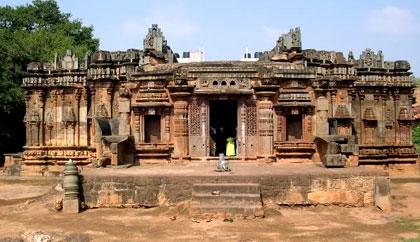 A tourist spot cannot be famous entirely for historical sites, relics and monuments but also for temples and shrines as well. Temples are sites with historic lineages, engravings dating back centuries and they stand as testimony to several historical and ancient stories untold for ages. Dharwad municipality in the state of Karnataka is famous for its religious shrines which are scattered all across. Religious spots also acting as tourist hubs and sightseeing places are aplenty in Dharwad - Hubli district dating back to 11th and 12th centuries an almost as old as the city itself. Bhavanishankar Temple is a wonderful artistic structure still standing in Dharwad municipality.

Located in Hubli district of Dharwad municipality, Bhavanishankar Temple houses the relic of Lord Narayana along with 10 embodiments of the lord Vishnu himself. Belonging to the Chalukyan era and estimated to be constructed and commissioned by King Someswara 11 around 1068-1076 AD, Bhavanishankar Temple is a splendid work of art to be revered. The idol or relic is housed within the sanctum sanctorum enshrined with Lord Narayana’s ten embodiments or what is popularly known as Dashavatara in Hindu mythology. The intricate architecture on the walls and ceilings of Bhavanishankar Temple is unique and showcases the handiwork of the Chalukyan rulers and dynasty.

Dubbed as a holy site for devotees who throng the temple premises on auspicious days and ceremonies and festivals. Bhavanishankar Temple located in Hubli is open to visitors and devotees all through the week from 6:00 am in the morning till 6:00 pm in the evening. Renovation and conservation works of the temple began in 2006 by ASI.