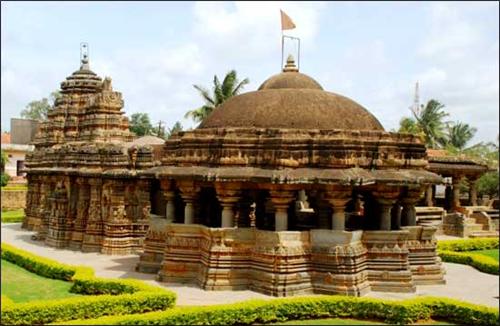 Dharwad in Karnataka is a city with a historical backdrop dating back 900 years and during this phase historical monuments, architectural edifices, temples, tourist hotspots have emerged in this region. Situated off National Highway 4 and midway between Bangalore and Pune, Dharwad is famous for its architectural heritage, its educational institutions and of course the temples constructed in the twin city of Dharwad-Hubli districts. Built in an exquisite architectural style visible during the Chalukya dynasty and rule, Dharwad’s temples are worth visiting. Chandramouleshwara Temple is indeed a superb rendition of beauty and devotion blended into a structure still standing tall as a witness of the Chalukya Dynasty of 11th and 12th centuries.

Chandramouleshwara Temple is located in Hubli city at Unkal in Dharwad district. The temple is 900 years old and is protected and conserved by the Archaeological Survey of India under the Ancient Monuments and Archaeological Sites Act 1958 as a monument of national importance. Resembling the Pattadakal, Aihole and Badami style of monuments, Chandramouleshwara was constructed during the Badami Chalukya period. The Shiva Lingam housed in the temple has 4 faces and also known as Chaturmukhi Lingam apart from the other Shiva Lingam which is found  enclosed in the shrine in the main temple. These two Shiva Lingams are accompanied by two statues of Nandi, Shiva’s Bull at the entryway. Crafted out of black granite stone, the pillars and engravings of this temple are marvellous.

Chandramouleshwara Temple stands out from the other temples found in North India in its appearance as the Garba Griha or main temple has 4 doors lined in 4 directions along with 8 other doors on the temple premises. The temple built by the Chalukya rulers holds no clue as to the identity of the actual ruler who commissioned it akin to the masons, architects, craftsmen who established it. Furthermore, the images of Lord Ganesha in a dancing posture along with Jalandhaara are an exquisite piece of art. The only testimony can be found in two stone engravings found at the temple site in Unkal dating back to 11th and 12th centuries. Conservation process is underway as Archaeological Survey of India or ASI has constructed a compound wall to preserve the temple premises from being encroached by local folks.

February and March will be ideal seasons to visit Chandramouleshwara Temple as Shivratri is celebrated with great fanfare at the premises attracting a wave of devotees and visitors.