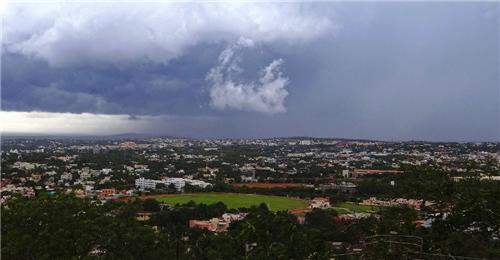 Dharwad literally means a resting place or entryway for travellers and the district aptly keeps its promise to the core as an ideal tourist destination for visitors. Dharwad was ruled by several dynasties and kings for centuries and the city is almost 900 years old. Nevertheless, Dharwad’s actual identity is still elusive and confounding, although the kingdom came into the limelight mostly under the Chalukyan rule. Dharwad’s contours and its strategic position in state of Karnataka makes it the meeting ground of instructive, academic and commercial growth.

With its location on the boundary of Western Ghats situated on the eastern side of Dharwad, the twin cities of Dharwad-Hubli under Dharwad-Hubli Municipal Corporation cover an area of 13,738 square kilometres with Maharashtra situated at a distance of 550 kilometres south of the district and Bengaluru lying at a distance of 425 kilometres to the north. At an elevation of 750 metres above sea level, Dharwad experiences a healthy climate with dense vegetation which is responsible for Dharwad’s primary contribution to the economy emerging from agriculture. The region is fast transforming into an industrial hub which is why the forest cover is shrinking and responsible for the drying up of innumerable lakes amongst which only a few man -made lakes and natural reservoirs like Unkal, Sadhankeri, Kelgeri, Navalur and Hoysallapur and Nuggikeri exist today.

Situated at an adjunct topographical position of the Western Ghats with red soil from its forest cover and the plains of Deccan with black soil, Dharwad is rich in flora and fauna with Karnataka University’s botanical garden acting as a refuge for birds and animal species found in the region. Among minerals and rocks found in this region, mention must be made of metamorphic rocks like granite, gneisses, charnockite, limestone, dolomite, quartzite, manganese, gabbro, iron-ore deposits, metabasalt and pyroxenite across the plains, rocky terrain and sandstone, shale and limestone the embankment of Bhima River.

Although Dharwad is a dry region yet it is known as Chota Mahabaleshwar plateau for its mild to moderate climate with harsh summers from end February till June accompanied by electric or thunderstorms and humid climate during monsoon with 711.5 mm of normal rainfall throughout the year with pleasant winters from October till mid February.

With a demographic concentration of 40,00,000 with urban population rate being 1,349,563 with  Hindus constituting 68%, Muslims amounting to 26%, Christians forming 5.6% and 0.4 other communities according to Census survey of 2011 and the primary occupation of the people is agriculture and little industrial belts and commerce and IT hubs. Dharwad’s Pedha, a sweetmeat is famous in the region. Kannada is the official language spoken by majority of the residents of Dharwad with Hindi and English as well.