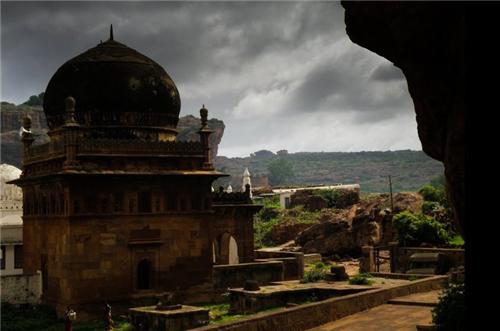 Remains of Chalukya Dynasty from the 11th and 12th century
Dharwad’s history is confounding as there are several possibilities presented amounting to its actual nomenclature. Literally, Dharwad means resting place or an entryway which stood at the conjuncture or meeting ground of two regions, i.e. Western Ghats and the Deccan plains where travellers can recline and relax during their journey. In actual context, Dharwad is a combination of two Sanskrit names which roughly translates as Dwarawata by breaking two words; dwara meaning door and wada signifying town or city.

Yet another possibility of Dharwad deriving its name also emerges in history during the reign of King Dharav of Vijayanagara dynasty, expected year 1403 and Dharwad has evidence of this rule from scriptures and stone engravings identifying this region as Kampana Sthana. History also states a series of events responsible for the name Dharwad might have derived from. Beginning with the Chalukya dynasty who ruled Dharwad during 12th Century, a king called Bhaskara Deva who lived around 1117 might have named the town as inscriptions found in this region indicate so. Following closely on its heels, comes another possibility from the fact that Dharwad underwent handovers several times beginning with the acquisition of Bahamani Sultanate after which this area came under the rule of Vijayanagara dynasty in 14th century when ruler Dhar Rao constructed the fort of Dharwad in this region.

Dharwad enjoyed partial independence under a Hindu ruler soon after the defeat at battle of Talikot in 1565 and thereafter Vijaynagar fort was acquired by Adil Shah of Bijapur in 1573. The fort became a ground of contention for many beginning with Mughal Emperor Aurangzeb’s acquisition in 1685 followed by a brief stint by Peshwas of Pune; Hyder Ali of Mysore also claimed it in 1778 and it was again acquired by the Marathas in 1791. The British East India Company established their reign over Dharwad by encompassing it within Bombay Presidency in 1818 and after independence Dharwad was placed within Bombay till 1956 after which it finally was incorporated within Karnataka in 1972 when this new state was born with amalgamation of Kannada speaking regions.

Hubli district was merged with Dharwad under Dharwad - Hubli Municipal Corporation since 1961. Hubli is situated at a distance of 20 kilometres from Dharwad and is also an important historical site. Hubli or Hubballi which means blooming creeper has also been under the rule of several kingdoms, from Adilshahis to Nawabs of Savanur to Shivaji and to the British who constructed a factory here.